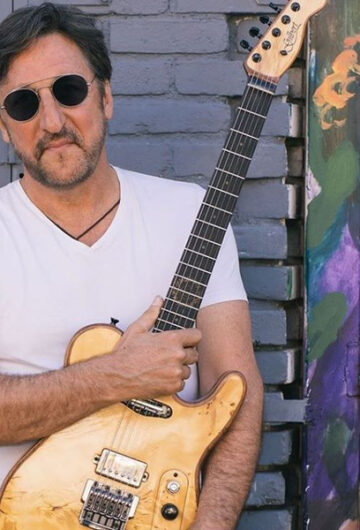 Richard Smith was born in Detroit and raised in Eugene, Oregon. It was a Chick Corea concert at the age of 14 that initially fueled his passion for music. "I was so blown away by that concert that I rode my bike home, picked up the phone to promptly break up with my girlfriend, and tried to stay up all night practicing. Come to think of it, I have been working pretty hard at music ever since."

At age 23, Smith received a teaching fellowship to U.S.C., in Los Angeles. This event changed his life and his music forever. Luminaries such as Lee Ritenour, Paul Jackson Junior, Larry Koonse, Christopher Parkening and the entire L.A. Guitar Quartet had attended USC, and Richard considered it an honor to have received such an award.
Richard’s first break came when guitar legend and U.S.C. instructor, Joe Diorio recommended him for a gig with contemporary jazz pianist Billy Mitchell. Mitchell introduced Smith to R&B/Jazz, a style that has become an indelible part of Richard’s sound. “I fell in love with all of the beats that were kicking around and when compared to the music in Eugene, it was such an amazing tapestry of sounds that I wanted to jump into everything head-first”.
After leaving Mitchell’s band, Smith began playing with the many L.A. based groups of the day – Siegel, Richard Elliot, Rick Braun, Guitars and Saxes, and Max Bennett among others. Smith joined Richard Elliot’s group and remained for 10 years, recording 6 number one albums for the Blue Note label. At the same time, Richard was rising in the ranks of the professorate at U.S.C., achieving the level of professor and department chair in the Studio/Jazz Guitar department all before the age of 30.
“I spent the ’90s running the program at U.S.C., touring the world 100 days a year, playing sessions and making records on my own. I loved it all and couldn’t say ‘no’ to any of it.” Richard’s first disc “Inglewood” was made with money from a U.S.C. student award and featured friends Kenny G and Dan Siegel. Ultimately “Ingelwood” was nominated for “album of the year” in Japan. Since then, every one of his 10 solo discs has reached the top of the music charts and have garnered awards such as ‘Best New Artist’ (Radio and Records Magazine) and best album of the year (Tune Up Magazine).
Richard Smith’s Thirteen solo recordings have established him as a veteran of the contemporary music world – with critical success on every one of his releases. His albums have received accolations such as “Best Contemporary Jazz Guitar Album” (Tune Up Magazine), nomination for “Record of the Year” (Ad Lib Magazine), and “Best New Artist” (Radio & Records Magazine). His album ‘SOuLIDIFIED’ spent 17 weeks in the top 10 for radio airplay of American contemporary jazz radio (Radio and Records Magazine) and 3 weeks at number 1 in the World for satellite and cable airplay (Music Choice).
His recent recording, “Tangos” – 2014, made the top 10 indie and contemporary jazz charts for over 5 months. “One World, Two Guitars” is an exciting duo project with the virtuoso Sicilian guitarist, Francesco Buzzurro. The duo tours regularly in America and Europe. His 2010 release ‘L.A. CHILLHARMONIC’ features Alex Acuna, Brian Bromberg, Vinnie Colaiuta, Jeff Lorber, Eric Marienthal, Michael Paulo, Greg Adams, and the Tower of Power horn section. The touring ensemble won a nomination for Best International Group of the year from the Canadian Smooth Jazz Awards. In 2012 touring and teaching took him to England, Norway, Denmark, Sweden, Holland, Italy, Australia and Tahiti.
Richard is also full professor and former Chair of the Studio/Jazz Guitar department at the renowned Thornton School of Music at the University of Southern California in Los Angeles. He holds a dual appointment, and is also a member of the new Popular Music Performance Studies department – the first of its kind at the conservatory level. Richard developed a groundbreaking course entitled “Contemporary Music, a Global Perspective’, where USC students travel to London and collaborate with an international student roster at The Institute of Popular Music Performance (ICMP). Richard also developed the first DMA (Doctor of Musical Arts), Contemporary Guitar, program in the World at USC. Graduates of this program hold distinguished positions as professors, deans and department chairs, all over the World.
Richard’s students are working professionally from Broadway and the Los Angeles Philharmonic, recording and touring with such luminaries as Chick Corea, Herbie Hancock, Dan Siegel, Marc Anthony, Josh Groban, Michael Buble, Elton John, Madonna, Michael Bolton, Bono, Maroon 5, Jenifer Lopez, John Mayer and performing on current hit television programs such as American Idol and Glee.
In EUROPE Richard has performed master classes at the Institute of Contemporary Music Performance, London, The Academy of Contemporary Music, Guildford, The Leeds College of Music, The London College of Contemporary Music, the Academy of Popular Culture, Leeuwarden, Holland, The Rotterdam Conservatorium, The Utrecht Conservatorium, The Royal Academy of Music, Denmark, Music Academy 2000, Bologna, The Universtate d’Rome, Ionian University, Greece, The ESC Guitar Seminar in Siracusa and many more. In 2012 he spent a semester as visiting professor at Agder University, Norway. Richard also has on-going relationships with schools in Australia, Malaysia, Norway, England, Greece, Italy and Argentina.
He is endorser of Black Diamond strings, Mark Gilbert guitars, James Tyler guitars and Wright Guitars.