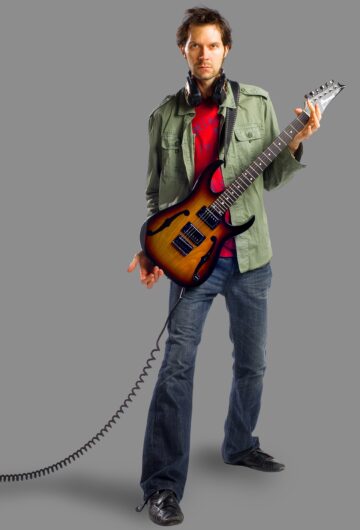 Paul Brandon Gilbert (born November 6, 1966 in Illinois, USA) is an American musician. He is well known for his guitar work with Racer X and Mr. Big, as well as many solo albums. He also joined Joe Satriani and John Petrucci on the 2007 G3 tour. Shrapnel Records Around 1981-82 Paul first contacted Mike Varney, founder of Shrapnel Records, asking for a gig with Ozzy Osbourne. At the time Varney couldn't think why Osbourne would want a 14 year old guitarist, but after listening to his demo it changed his mind. They talked for the next 3 years, until Paul came to L.A for the GIT (Guitar Institute of Technology), and then was ready to record Racer X's debut album Street Lethal.

Racer X
Formed in Los Angeles in 1985, Racer X originally comprised Paul Gilbert (guitar), Juan Alderete (bass), Harry Gschoesser (drums) and Jeff Martin (vocals). They were heavily influenced by Judas Priest and Gilbert’s playing was reminiscent of Yngwie Malmsteen, displaying fast-driven solos with extreme-level technique. Gschoesser was replaced by Scott Travis (later known for being the drummer for Judas Priest) in 1986, and Bruce Bouillet was added as a second guitar player. Bouillet was a very skilled player, as he had to play over Gilbert’s always difficult and challenging phrases. Paul Gilbert gained recognition as one of the fastest guitar players in the world due to incredibly technical pieces like “Frenzy”, “Scarified”, “Y.R.O.” and “Scit Scat Wah”. Gilbert left Racer X in 1988, and the members of the band went their separate ways. The band would eventually reform, after Paul received an e-mail from a disgruntled fan under the alias “Snakebyte” about the musical direction of his solo albums. Snakebyte accused Paul of abandoning the shred guitar genre that he helped popularize with Racer X.
Paul contacted the members of Racer X, and all agreed to return, with the exception of Bruce Bouillet. In mid-1999 the band recorded the album Technical Difficulties. Technical Difficulties went gold in Japan, and Racer X’s new record label requested a follow-up. In late 2000, the band released another album, Superheroes. The record was mixed by former Racer X guitarist, Bruce Bouillet.
In order to further capitalize on their new-found success in Japan, Universal Japan requested that the band record a live show for another live CD and DVD. On May 25, 2001, the band played their first live performance in thirteen years to a sold-out crowd at the famed Whisky a Go Go in Los Angeles. The show was recorded for both audio and video, and in 2002, both the CD and DVD were released under the name Snowball of Doom.
In January 2002, in support of Superheroes and Snowball of Doom, Racer X toured Japan and Taiwan. The band performed these shows in their Superheroes costumes, and the final show, in Yokohama, was hastily recorded in two tracks on the sound board and was to be later released as Snowball of Doom 2. Later that year, Universal Japan pushed for another Racer X release. In October 2002, all four members of Racer X gathered at Gilbert’s house in Las Vegas to record Getting Heavier, which was sold alongside Snowball of Doom 2 in a package deal. Although the album was a successful release in Japan, some fans were disappointed with the lighter tracks, which resembled a Paul Gilbert solo album more so than a traditional Racer X album.
Racer X performed at the 2009 NAMM show at the Anaheim Convention Center in Anaheim, California. Andy Timmons and his band opened the show, followed by a solo set from Paul Gilbert, and finally Racer X. The Racer X lineup consists of Paul Gilbert, Scott Travis, Jeff Martin and John Alderete.
Mr. Big
When Billy Sheehan left David Lee Roth’s band in 1988, he joined with Paul Gilbert, who had left his former band, Racer X. They founded Mr. Big, with Pat Torpey on drums and singer Eric Martin. The band was initially a huge success in Japan, and became famous internationally in 1991, with the release of their second album, Lean Into It. This album featured the ballad “To Be With You”, which received strong media play and reached #1 on the Billboard Hot 100.
Gilbert continued playing in Mr. Big until the late 1990s. He left the band in 1997 to pursue a solo career, and was replaced by Richie Kotzen. Mr. Big disbanded in 2002. 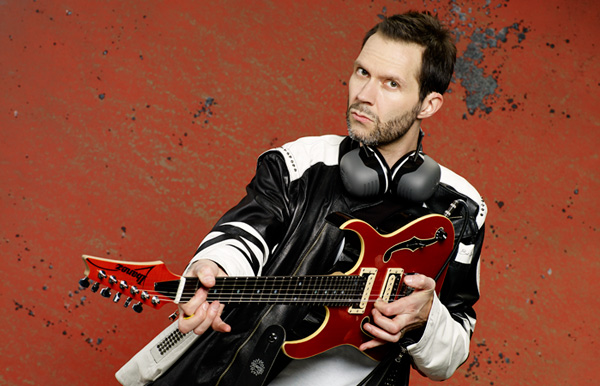 In June 2009, Paul Gilbert reunites with the rest of the original Mr. Big bandmembers: Eric Martin, Billy Sheehan and Pat Torpey for a reunion tour in Japan.
Projects
In May 2003 he played on an only twice-performing project called Yellow Matter Custard, a Beatles cover band consisting of Mike Portnoy (Dream Theater), Neal Morse (ex-Spock’s Beard), and Matt Bissonette. They took their name from a lyric in “I Am the Walrus”: “Yellow matter custard, dripping from a dead dog’s eye”.
He rejoined Portnoy along with Dave LaRue and Daniel Gildenlöw for a Led Zeppelin tribute band called Hammer of the Gods in 2004. In September 2005, he joined Portnoy, Sean Malone, and Jason McMaster in the Rush tribute band Cygnus and the Sea Monsters. In May 2006, he joined Portnoy, Gary Cherone, and Billy Sheehan to form Amazing Journey: A Tribute to The Who, playing three shows. The band (excluding Sheehan) destroyed their equipment after the show in homage.
He was also revealed to be the guest guitarist on the Neal Morse solo album, Sola Scriptura.
In 2007, Paul Gilbert toured with Bruce Bouillet for promotion of his first instrumental album, Get Out of My Yard, which was released in 2006. Also joining him was his wife, Emi Gilbert, on keyboards. Paul Gilbert also joined Joe Satriani and John Petrucci in the 2007 G3 tour. This was the 5th North American G3 run and the 12th tour worldwide since its inception.
On January 23, 2008, Paul released an instrumental CD titled Silence Followed By A Deafening Roar. It was released in Europe on March 31, 2008, and in America on April 8, 2008. This is Paul’s second instrumental album.
On October 22, 2008, Paul released an album with vocalist Freddie Nelson. The collaboration has been described as a cross of Queen and Mr. Big. They will be playing their first live shows in the first days of February 2009, with more dates to be announced.
Paul with Racer X performed at the 2009 NAMM show at the Anaheim Convention Center in Anaheim, California. Andy Timmons and his band opened the show, followed by a solo set from Paul Gilbert, and finally Racer X. The Racer X lineup consisted of Paul Gilbert, Scott Travis, Jeff Martin and John Alderete.
Paul also joined George Lynch and Richie Kotzen on the Guitar Generation tour.
Paul has also been confirmed as a performer at the 2009 Tuska Open Air Metal Festival.
On June 30, 2010, Gilbert’s new album Fuzz Universe was released in Japan, with a release in America and Europe soon after. It was Gilbert’s third instrumental solo album. A cover version of Johnny Cash’s “Leave That Junk Alone” was featured as a Japanese bonus track.
On June 25, 2014 Gilbert released his studio album Stone Pushing Uphill Man. Initially only available in Japan, the album was eventually released in the United States on August 12, 2014.
Gilbert is currently the Rock Guitar instructor for ArtistWorks, an online music school.
He published three more albums: “I Can Destroy” (2016), “Behold Electric Guitar” (2019) e “Werewolves of Portland” (2021).