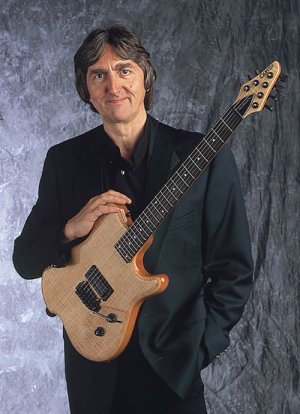 Beyond his ability in improvising mercurial solos and sculpting the guitar's voice into an ever-expanding range of textures and colours, Holdsworth has dedicated his energies to develop many different aspects of guitar technology. This has included new “baritone” variations of the instrument, his own custom 6-string designs (one most recently manufactured by Carvin), the invention of electronic components for the recording studio, and exploring the possibilities of guitar-based synthesizer controllers. Holdsworth's ability to improvise over complex and challenging chord voicing's always reveals a deep emotional base and a strong, imaginative personality that is as instantly identifiable as any among Holdsworth's generation of guitar and jazz masters.

The sounds of Django Reinhardt, Jimmy Rainey, Charlie Christian, Joe Pass, Eric Clapton, and John Coltrane were among this English musician’s early inspirations when he began to work professionally as a musician in his early twenties.
Born on August 6, 1945 in the city of Bradford, England, Holdsworth had been extensively tutored in aspects of musical theory and jazz appreciation by his father, an accomplished amateur musician. Holdsworth paid his musician’s dues early on working the dance-club circuit, where he began to meet fellow musicians who hailed from the south. One of England ‘s best jazz tenor saxophonists, Ray Warleigh, heard amazing potential in Holdsworth’s playing and brought him along to participate in jazz sets at the onset of the 70s, including sessions with Ray at Ronnie Scotts in London.
Holdsworth first recorded in 1969 with the band ‘Igginbottom on their lone release, “‘Igginbottom’s Wrench” (later reissued under the group name of “Allan Holdsworth & Friends”). In 1971 he joined Sunship, an improvisational band featuring keyboardist Alan Gowen, future King Crimson percussionist Jamie Muir and bassist Laurie Baker; they played live but never released any recorded material. Next came a brief stint with jazz rock band Nucleus, with whom Holdsworth played on their 1972 album, “Belladonna”. Holdsworth’s career brought him to international audiences suddenly in the early 1970s, when he joined drummer John Hiseman’s short-lived but much acclaimed progressive rock band, Tempest. A decade later, Tempest vocalist Paul Williams would team up with Holdsworth again to form Holdsworth’s IOU band and create their independently-released debut recording, which prompted Holdsworth to move his home from London to Southern California .
Holdsworth’s career throughout the 70s saw a series of feast-or-famine periods all too familiar to many of the most talented musicians. By 1975 Holdsworth had developed a reputation as one of England ‘s best, underrated guitarists in what was then the avant-garde of English instrumental music ensembles, the legendary group, Soft Machine. Holdsworth’s trademark sound is evident with a technique that routinely soars with supersonic intensity, and one of its earliest available samplings can be heard on the 1974 Soft Machine studio release, “Bundles” . While his reputation in Soft Machine attracted international audiences, he also gained the attention of one of jazz’s greatest drummers, the late Tony Williams, known for his pivotal role in bringing Miles Davis to explore rock-based riffs and motifs in an improvisational context. Holdsworth recorded on one of the most celebrated fusion albums from the mid-70s, “Believe It”, (Epic), as a member of the Tony Williams’ New Lifetime. This marked the beginning of Holdsworth’s career as a legendary journeyman, but one rarely performing before U.S. audiences. 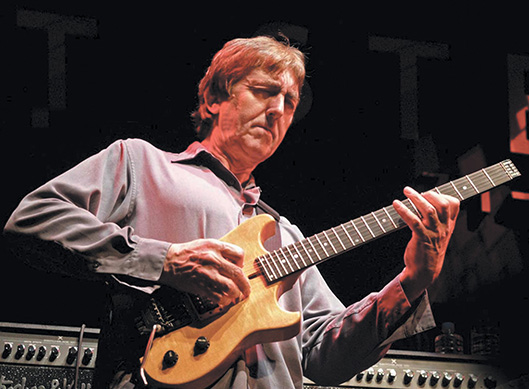 Between 1976 and 1978 Holdsworth’s guitar sounds and solos emerged as a mesmerizing tour de force and he participated in many of that era’s landmark jazz-fusion and instrumental rock recordings by Jean Luc Ponty (“Enigmatic Ocean”), Gong (“Gazeuse!”), and Bill Bruford (“Feels Good to Me”, “One of a Kind”). Late in the 70s, the once dominant genre of classic British “prog rock” stumbled on unsure footing as the punk and new wave bands rose in commercial prominence. Drummer Bill Bruford, a founding member of Yes who later joined King Crimson, suggested Holdsworth participate in a new project featuring the formidable rhythm section of King Crimson and a brilliant young violinist/keyboardist Eddie Jobson, who had worked with both Frank Zappa and Roxy Music. The resulting debut album, “U.K .” , became what was later considered the last and greatest milestones of 70s progressive rock. The band’s sound was at the time both technically and artistically at the cutting edge of rock music, given the coupling of Jobson’s innovative use of synthesizers and electric violins, coupled with Holdsworth’s unconventional chord voicings, searing solos, and passionate melodic phrases. The U.K. superband setting was as brilliant as it was short-lived, and egos and questions of creative direction led to a split between Bruford and Holdsworth on one side, and Jobson and bassist John Wetton on the other. In 1996 Guitar World cited Holdsworth’s contribution to U.K . as the factor in naming it one of the top 10 rock guitar albums “of all time.”
In 1978, Holdsworth decided he wanted to pursue a different, more live-based direction as opposed to his recent participation in lush, studio-crafted masterpieces. He sought out a more immediate, less intricately arranged band context than what had been established with Bruford, in order to explore a rock-oriented musical context that also explored extended instrumental ensemble improvisations. Holdsworth wanted to rediscover some of the energy and dynamics that had been so memorable in his live performances working with Tony Williams, and reluctantly parted company with Bruford’s band. Holdsworth began to develop his own trio with two other Northern English musicians, drummer Gary Husband, and bassist Paul Carmichael, which begun Holdsworth’s first touring band as a leader, the now-celebrated I.O.U. band. Their first recording “I.O.U.” sold exceptionally well for an independent release in 1982, and Holdsworth’s friend and admirer, guitarist Eddie Van Halen, proved instrumental in securing I.O.U. a recording contract with Warner Bros. Executive Producer Ted Templeman wanted to experiment with a “mini-album” concept, which resulted in the 1984 Grammy-nominated release, “Road Games”, which featured vocal cameos from long-time Holdsworth collaborator, the legendary Jack Bruce. It also featured a new American line-up, with Jeff Berlin and Chad Wackerman comprising the rhythm section. However tensions with the label over creative control led to a split between Holdsworth and Warner Bros. In 1985 Holdsworth signed with the Enigma label, enjoying creative control, and Jimmy Johnson joined the group after Jeff Berlin’s departure to pursue his solo career. Holdsworth then recruited one of the most respected L.A. session bassists, Jimmy Johnson, leader of Flim and the BBs. The last version of the I.O.U. band went back in the studio and with some notable guest appearances (among them bassist Gary Willis and original I.O.U. drummer Gary Husband) contributed to tracks for the highly successful release, “Metal Fatigue” (1985).
In 1986 the release of “Atavachron”, his fourth studio album, demonstrated Holdsworth’s focus on instrumental music, continuing his core band with Johnson and Wackerman. We can hear a use of a brand new instrument named the SynthAxe. This unusually designed MIDI controller (different from a guitar synthesizer) would become a staple of Holdsworth’s playing for the rest of his recording career, during which he would effectively become the public face of the instrument. “Atavachron” also featured stellar guest appearances by two of Southern California ‘s most sought after jazz keyboardists, Alan Pasqua and Billy Childs. Like other Holdsworth recordings to follow, it proved to be a summit for great drummers, with guest contributions from Tony Williams and Gary Husband. Husband’s increasingly successful career eventually led to Holdsworth’s appearance as a studio musician and band member with Level 42 for their 1993 release, “Guaranteed”.
The follow-up to “Atavachron”, “Sand” (1988), marked a new period with Holdsworth concentrating on his exploration of the SynthAxe and featured no vocal work. Holdsworth received the winning award in Guitar Player Magazine’s poll as “best guitar synthesist,” for many consecutive years afterward. With “Secrets” (1990) Holdsworth returned to his association with Enigma records, (which became the Restless label) featuring an album recorded mostly with the great session drummer Vinnie Collaiuta, who later joined Sting’s band and had previously worked with Frank Zappa and Jeff Berlin. “Secrets” further revealed Holdsworth’s rich harmonic vision and unleashed more distinctively “Holdsworthian” music, an enigmatic style that continues to invert, push, and transform the boundaries of more conventional rock, fusion, and jazz forms.
During this period the keyboardist from Stanley Clarke’s touring band, Steve Hunt, joined Holdsworth’s band. In the early 90s, Holdsworth also appeared in a jazz superband and at festivals with other great jazz and fusion legends, including Stanley Clarke, Billy Cobham, and Michael and Randy Brecker among others.
A collaboration in 1990 with fusion guitarist Frank Gambale came about in the form of Truth in Shredding, an ambitious collaborative project put together by Mark Varney through his Legato Records label.
1992’s “Wardenclyffe Tower” furthered an exploration of Holdsworth’s own designs for baritone electric guitars (built by luthier Bill DeLap) and broadened the use of his chordal orchestrations and solo phrasings via the SynthAxe.