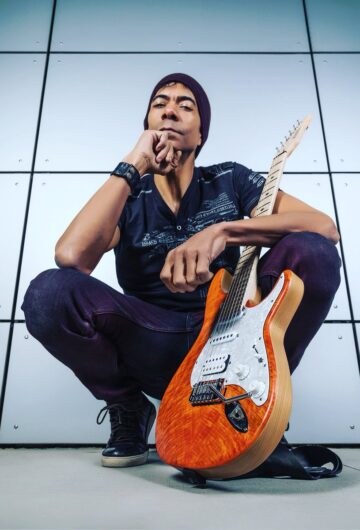 Greg Howe began playing the guitar at the age of 10, and around 16, after discovering Van Halen, the guitar became his obsession, transforming his already fluent vocabulary of pentatonic scales into a broader musical conception. In a couple of years Greg starts playing in clubs with his rock band, which sees his brother Al on vocals. The following years we see Greg hone his guitar technique while continuing to play in rock bands.

In 1988 Mike Varney, owner of Shrapnel Records and guitar expert asks Howe to record an album for his label after listening to a demo that Greg had sent him in order to be reported on the page by Varney on Guitar Player. The album, titled simply “Greg Howe”, features David Lee Roth’s bassist, Billy Sheehan on bass and Atma Anur on drums. The album immediately captured the attention of the guitar community and led him to numerous endorsement deals, magazine advertisements and seminars in the United States. After recording two albums with his brother on vocals (“High Gear” in 1990 and “Now Hear This” in 1991), his second solo album (1993’s “Introspection”) paves the way for a personal style consisting of a mix of jazz, rock, fusion, funk and blues that will extend throughout his entire discography. Each subsequent album – “Uncertain Terms” (94), “Parallax” (95), “Five” (96), “Ascend” (98) and “Hyperacuity” (00) – will see Howe progressively penetrate more and more decisively and satisfactory in the merger territories.
At the same time Greg makes himself available as a sideman for pop superstars, replacing Jennifer Batten on Michael Jackson’s 1996 History tour in Europe and Asia, touring the USA and Europe on Enrique Iglesias’ tour in 2000, doing two separated US tours in 2001 and 2002 with NSYNC and doing a promotional tour in 2003 with Justin Timberlake. In fact, Howe finally decides to leave the Timberlake tour in 2003 to finish the work of “Extraction”, a project by allstars of funk fusion of great depth with the virtuoso of the electric bass Victor Wooten (of the Flecktones) and the world-famous drummer. Dennis Chambers (formerly with Parliament / Funkadelics, John Scofield, Brecker Brothers, and currently with Santana).
Greg’s busy schedule continues with various projects. He is currently working on a series of online video lessons and is very active with clinics, trade shows and mini tours around the world.
In 2008 he released his album Sound Proof with the Italian drummer Gianluca Palmieri. In an interview in 2012 he declared the need to take a break and study time, away from the scene, to deepen the study of bouzouki with the aim of creating a fusion project, reminiscent of the great tradition of the seventies, which blends the music with jazz-rock atmospheres.
In 2013 he founded the rock group Maragold with Meghan Krauss on vocals, Kevin Vecchione on bass and Gianluca Palmieri on drums. On April 23 of the same year their self-titled debut album was released with a warm welcome from critics.
In a 2015 Guitar World article, Howe was ranked 10th in the “Top 10 Pick Squealers of All Time” and in 2019 his album “Wheelhouse” was listed as number 6 on the “Top 20 Guitar Albums of the Decade”.