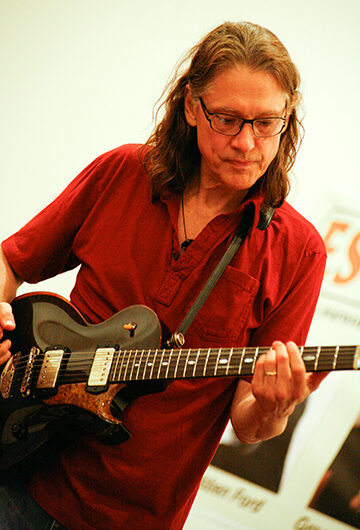 Born in 1951 in Woodlake, California, and raised in Ukiah, Robben was the third of four sons in a musical family. His father Charles was a country and western singer and guitarist before entering the army and marrying Kathryn, who played piano and had a lovely singing voice. Robben’s first chosen instrument was the saxophone, which he began to play at age ten and continued to play into his early twenties. He began to teach himself guitar at age thirteen upon hearing the two guitarists from The Paul Butterfield Blues Band, Michael Bloomfield and Elvin Bishop. In the late 1960’s, Ford frequented the Fillmore and Winterland auditoriums in San Francisco to see Jimi Hendrix, Eric Clapton, Cream, Led Zeppelin, Albert King, B.B. King and all of the progenitors of blues. “It was an incredible time for electric guitar,” Robben recalls.
On his interest in jazz, Robben says,” I fell in love with the sax-playing of Paul Desmond and The Dave Brubeck Quartet, and before long found Ornette Coleman, Archie Shepp, Yusef Lateef, Roland Kirk, John Coltrane, Wayne Shorter, and of course, Miles Davis.” These influences have stayed with Robben, playing a large part in his particular blend of jazz and blues that define him as a guitarist and allow him to play in a wide variety of settings.
After high school, Robben and his brothers Patrick (drums) and Mark (harmonica), formed The Charles Ford Band, named after their father and recorded for the Arhoolie label. Robben (on sax and guitar) and Patrick went on to tour the U.S. with Chicago harmonica player Charlie Musselwhite.
Robben’s first attempt at forming his own jazz quartet was picked up by legendary blues singer Jimmy Witherspoon, which brought Robben to L.A. He toured the U.S. and Europe with Witherspoon and was seen by Tom Scott and members of The L.A. Express, who were about to begin a promotional tour with Joni Mitchell for her recording, Court and Spark. Robben was invited to play guitar on the tour and played on two recordings with Mitchell and The L.A. Express. “The two years I spent with Joni were the most formative of my musical life. Joni was just brilliant and very accessible, and the members of The L.A. Express became good friends and teachers. It was great.”
Beatle George Harrison invited Robben to join him on his Dark Horse tour of the U.S. and Canada, raising his musical profile even further. Shortly after the two month stint with Harrison, Robben moved to Colorado to take a much-needed break from music and to study with Buddhist teacher, Chogyam Trungpa. In 1977, he was approached by Elektra Records, which produced his first solo recording, The Inside Story, with a group of musicians who went on to become the Yellowjackets. 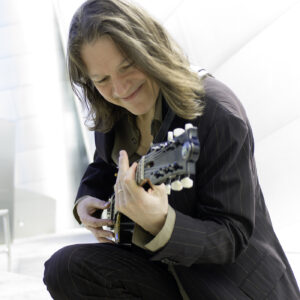 Elektra closed their doors in the early 1980’s, leading to a time of uncertainty. Robben moved to San Francisco to be close to family and his early musical history. Soon his career would take another upward swing, recording and touring with Michael McDonald, securing a recording contract with Warner Brothers Records, and meeting his soon-to-be wife, actress Anne Kerry. Subsequently, they would collaborate on 3 albums on their own label, Illyria, most notably, Weill, recorded live with the West German Radio Big Band at the Cologne Philharmonic Hall.
After moving to New York, Robben was invited to play with musical icon Miles Davis. “Producer Tommy LiPuma played Miles my work with the Yellowjackets, then three days later Miles called me personally to join his band. Shocking!” recalls Robben. He lamented having to leave Miles after only six months because of recording commitments with Warner Brothers, but was told by Miles that if he ever wanted to come back, “just come back.”
Robben’s 1988 release for Warner Brothers, Talk to Your Daughter, brought his first Grammy nomination (Best Contemporary Blues Recording), and he started touring the world under his own name. Still based in New York, he backed David Sanborn on the television show “Night Music,” on which Sanborn hosted a variety of musical acts. Robben toured with him in 1990, then moved back to southern California shortly thereafter to be closer to his own band.
After leaving Warner Brothers, Robben signed with Stretch/GRP Records, where he finally found a real home for his creativity, recording three CDs for them with his band,The Blue Line (Tom Brechtlein on drums and Roscoe Beck on bass). After a very fruitful eight years, Robben disbanded the group and recorded two more CDs for the label which had then become Stretch/Blue Thumb: Tiger Walk, an instrumental recording produced in New York with Keith Richard’s rhythm section, and Supernatural, his most accomplished work up to that point as a songwriter.
In 2000, Robben was invited to tour with Phil Lesh and Friends on a co-bill with Bob Dylan, reuniting him with Billy Paine and Paul Barrere of Little Feat, as well as drummer John Molo. “This experience gave me new respect for Jerry Garcia as a musician and songwriter. The songs and musical context were pure pleasure–real guitar music!” When his contract expired at Stretch/Blue Thumb, Robben signed with Concord Records, the largest independently-owned record company at the time. In 2002, he released Blue Moon, and in 2003, Keep On Running, a recording full of the 60’s blues/R&B feeling he grew up on. His third release for Concord was titled Truth. “I feel this is the best work I have done in terms of a solo recording. It is my most realized work as a songwriter, and I feel like I am reaching higher ground as a guitarist.Truth represents the blues as they are today; some of the songs are sociopolitical in essence, but not without humor, and the musical setting is fresh.”
During that same period, a super group-Jing Chi-came into being, founded by bassist Jimmy Haslip, with drummer Vinnie Colaiuta and Robben. They released three records, the first, self-titled (2001), followed by Jing Live ( 2003), and Jing Chi 3-D (2004). In 2007, Robben toured with the legendary guitarist, Larry Carlton, resulting in Live in Tokyo, and an “unplugged” DVD, The Paris Concert 2008.
Robben’s fourth release for Concord, Soul on Ten, is a live recording performed in San Francisco (2009). “People had been requesting a live recording for years and I had the right band, music and venue to pull it off.” The record also includes two studio tracks which feature Larry Goldings on B3 organ and John Button on bass.
In 2010, Robben and a group of musical friends who have played in different combinations and contexts over the years decided to focus on a project which became the formation of Renegade Creation, with Jimmy Haslip, Gary Novak and Michael Landau. Two records, Renegade Creation and Bullet, came out of the effort and the group toured widely to much fan appreciation. 2012 found Robben playing internationally with the Miles Davis tribute band, Miles Smiles, featuring past Miles’ alums, Omar Hakim, Darryl Jones, Wallace Roney and Joey DeFrancesca, as well as touring with Bill Evans and Randy Brecker’s group, Soulbop.
Provogue Records/Mascot Label Group released Bringing It Back Home in February, 2013, to critical acclaim both in the U.S., Europe and Japan. This album revisits and reshapes Ford’s musical roots, with studio accompaniment from Harvey Mason, Larry Goldings, David Piltch and Stephen Baxter.
In March, 2014, Provogue released A Day In Nashville, a tour de force of live studio recording, accomplished literally, in just one day in Nashville.
Robben’s last release, Into The Sun, came out in March 2015. Debuting at #2 on the Billboard Blues Chart and was nominated for a Grammy Award in the Contemporary Blues Category. Featured guests are Warren Haynes, Keb’Mo, Robert Randolph, ZZ Ward, Sonny Landreth and Tyler Bryant.
His latest recording, Purple House (2018) is a remarkable collection of songs featuring Ford’s enlightened approach to composition and production. Exploring the range of the studio with a fresh approach, he weaves in and out of surprising musical moments, ear-wormy hooks, and thoughtful lyrical themes. His sophisticated approach to the blues is evident throughout, yet the record is far more diverse regarding song structure and style. “I was inspired to go past what would certainly happen on a traditional blues or R&B album, take more chances sonically, and open it up without loosing the essence of soulfulness or live performance.”
on-going
An important and essential component of Robben’s career is his commitment to teaching and passing on what he’s learned over the past 40 years to current and future musicians. His instructional videos and clinics over this time have culminated in a collaboration with TrueFire and the birth of the Robben Ford Guitar Dojo. The wealth of his expertise and creativity is generously presented in these state-of-the-art productions, and will be, for years to come.