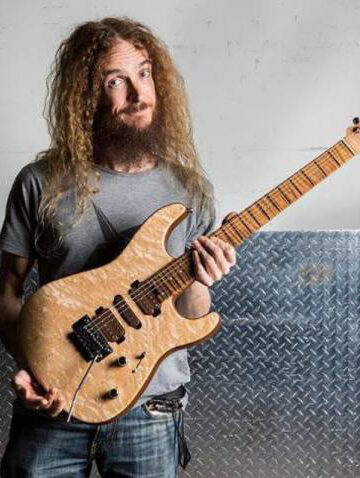 Guthrie, born on 27th December 1971 was brought up in Chelmsford in Essex, England. Guthrie was brought up in household which featured guitars in abundance; musical inspiration surrounded him in the form of early Elvis, Chuck Berry, Jimi Hendrix, The Sensational Alex Harvey Band, The Beatles and The Stones mixed with jazz players such as Wes Montgomery and Charlie Christian. When he was fourteen he discovered Frank Zappa (the Them or Us album, with Steve Vai) and expanded his listening diet to players ranging from Yngwie Malmsteen to fusion players such as John Scofield, Mike Stern and in addition non guitar players John Coltrane and Bela Fleck. In 2019, Govan organized the Tony Mills Festival to honor his ailing collaborator Tony Mills. Govan played a set of all Mills' originals at the festival. 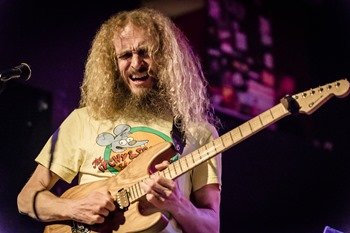 Whilst reading English at Oxford he sent a tape to Mike Varney (of Shrapnel Records) when he received a reply from the man himself praising his playing he decided to take a year out from his studies to write and record some music. He then sent a tape to Mark Varney (Legato Records) who included him on his Guitar on the Edge CD series. Both Mike and Mark wanted to sign Guthrie once they became aware of his immense talents but he felt reluctant to be stereotyped as part of an increasingly self indulgent shred movement and decided to continue to work on forging a truly unique style of instrumental guitar music.
In 1993 he won Guitarist magazine’s ‘Guitarist Of The Year’ competition (won the previously by Dave Kilminster of the Roger Waters band). Beating hundreds of other talented entries Guthrie’s journey along the road to success had begun.
He took a job as a transcriber for Guitar Techniques Magazine and was contacted by Institutes keen to employ his services as a teacher to include; The Guitar Institute Acton, ACM Guildford and BIMM Brighton where he continues to teach. During this period drummer Pete Riley (formally drummer for Republica and Keith Emmerson) heard Guthrie and got in contact wanting to join forces musically from here they begun to meet and jam along with Seth Govan on bass.
While working at ACM Guthrie met drummer Mike Sturgis, Mike was working as a session drummer for Asia’s Aura album, the album included a star studded line up of session players – Tony Levin on bass, Vinnie Colaiuta & Simon Phillips on drums and Steve Howe & Elliot Randall on guitar. Mike knew that they were looking for a versatile guitarist; it was then that he recommended Guthrie.
Guthrie went on to play all over the world with Asia and remained the longest standing guitarist in the bands history.
In 2006, Asia keyboardist Geoff Downes decided to leave to reform an earlier Asia line-up for a reunion tour to mark the 25th Anniversary of Asia’s 1st album. It was then that Govan and the other two band members, John Payne and Jay Schellen along with their new keyboard player Ryo Okumoto from Spocks Beard formed GPS. Now due to release their debut album and tour the UK in September and October 06.
Guthrie also plays with The Fellowship, a 5 piece jazz fusion act that have enjoyed a residency at the Bassement Club in Chelmsford, Essex for the last 6 years. Additionally he has recently been involved with dance act Young Punx, providing everything from surf guitar to shredding on their debut album and more recently playing live at their performances to over 24000 people at a packed Yokahama Arena in Japan. 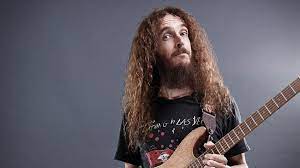 Guthrie’s main focus is and has always been his own work and Erotic Cakes represents the first context in which this multi talented individual has been able to draw on all these influences to produce something that truly represents his unique musical identity. The album is set to turn the guitar playing world on its head and is a listening and inspirational jewel his exquisite playing and mind blowing compositional skills will undoubtedly become the new bench mark for guitar music. Equally Seth Govan and Pete Riley have raised the bar with their Bass and Drum virtuosity, the performances are truly amazing and the one thing that will separate this recording from the mainstream is the musicality of the song writing and the production. Erotic Cakes marks Guthrie’s move into the next chapter of his musical journey with his long awaited debut album.
The main collaborations during the last decade are here written.
The Aristocrats
In late 2011, Govan announced a new tour with a new band The Aristocrats, featuring Bryan Beller on bass and Marco Minnemann on drums. Their self-titled debut album was released worldwide in September 2011, followed by “Culture Clash” in 2013. In January 2015 The Aristocrats released their second live CD/DVD “Culture Clash Live!” through all official channels and a very special so-called official self-released bootleg double CD “Secret Show – Live In Osaka” which was only available in their own webstore and during the live concerts at the merchandise table. The band’s 3rd official studio album was released in 2015, and its title is “Tres Caballeros”. In March 2019 The Aristocrats recorded their 4th studio album “You Know What…?” in the Brotheryn Studios (Ojai, CA), which was released in 2019.
Steven Wilson
Govan was the lead guitarist in Steven Wilson’s band, performing on the critically acclaimed “The Raven That Refused to Sing”, “Hand. Cannot. Erase.”, and “4½” albums, and was a full-time touring member of Wilson’s band until April 2015. These recordings captured what many agree to be some of the finest guitar playing in the history of the progressive rock genre, and introduced Govan to a broader global audience. Guthrie left Steven Wilson’s band because of touring priorities with The Aristocrats whose touring schedule was clashing with Wilson’s. Guthrie recommended Dave Kilminster as his replacement.
Hans Zimmer
Since 2016 Guthrie Govan is also the lead guitarist in Hans Zimmer Live live band and has toured the world with this ensemble. Hans found Guthrie on YouTube where he saw Guthrie play a fretless guitar. After some messages were exchanged on Guthrie’s official Facebook page (Guthrie thought he was dealing with an imposter first, until Hans sent him his private phone number and asked Guthrie to call him), he has been part of the live band but also has been contributing already to a few Hans Zimmer soundtracks like The Boss Baby (2017), X-Men: Dark Phoenix (2019) and The Lion King (2019).
In 2013, Govan held a guitar workshop with Paul Gilbert. He is also one of the guest stars on Michael Angelo Batio’s album Intermezzo, released in November 2013. Guthrie was also a guest guitarist on one song, Electric in My Veins, in Nick Johnston’s solo album, In a Locked Room on the Moon Govan was a guest guitar soloist in the song “Erised” by Periphery.
In 2016, Govan played alongside Joe Satriani and Steve Vai in G3 2016 touring across Europe. The trek made its way through Italy and Germany and featured support from Mike Keneally on guitar, keyboards and vocals as well as Govan’s band, the Aristocrats: bassist Bryan Beller and drummer Marco Minnemann.
In 2019, Govan organized the Tony Mills Festival to honor his ailing collaborator Tony Mills. Govan played a set of all Mills’ originals at the festival.