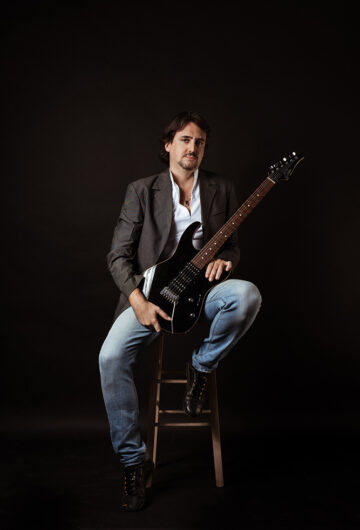 His second demo-tape, recorded at the age of 16, is considered the best of the year and reviewed by the most prestigious national newspapers, making him win the title of "best young Italian promise" for what concerns the modern guitar.

At 17 he recorded his third demo-tape, this time with the band Arabesque who, in addition to receiving excellent reviews from radios, fanzines, national and international newspapers (Japan, USA, Germany, France, Switzerland, Holland, Russia, UK…), is considered the Italian answer to the best American groups of the genre. He has collaborated both in studio and live with various artists ranging from pop-rock music to jazz and fusion (Gianni Bella, Vincenzo Spampinato, Mario Venuti, Nuovi Briganti, Danilo Amerio, Tony Esposito, Pascal Mulot, and others).
He has 9 solo CDs to his credit, including “Presentation” (1997), “Guitar Academy 2001” (2001) and “Versatile” (2004) which have received various reviews and favourable reviews from the national and international specialized press. In March 1995 he plays at the Teatro Smeraldo in Milan with the orchestra of the American minimalist composer Rhys Chatam, with the recording of a CD of world distribution; in the same year he was awarded in Switzerland as the best young European talent.
He participated in the international convention of the A.D.G.P.A., Held in Soave (VR) in 1998 and 1999, alongside names of the caliber of John Stowell, Albert Lee, Mick Abrahms (Jethro Tull), Tommy Emmanuel, James Burton and Jerry Donahue. In the winter of 2001 he played at the “IOU MED – Concert for the Mediterranean” held in Syracuse, in connection with Greece, Morocco and Tunisia. In 2001 he gave a conference on aspects of the modern guitar at the Catania Higher Institute for Training of Excellence. From 2001 to 2013 collaboration with AXE MAGAZINE, one of the most important magazine in Italy in the electric guitar sector, curating a monthly column on performance. For the past 20 years he has collaborated with GUITAR CLUB and CHITARRE, always as a columnist.
In 2005 the Mexican Rock Radio ROCK EVOLUCION, specialized in instrumental music, contacted Andrea to insert his music in the playlist and transmit it to all the listeners of the Radio in question, which forms an estimated audience of about 4,500,000. 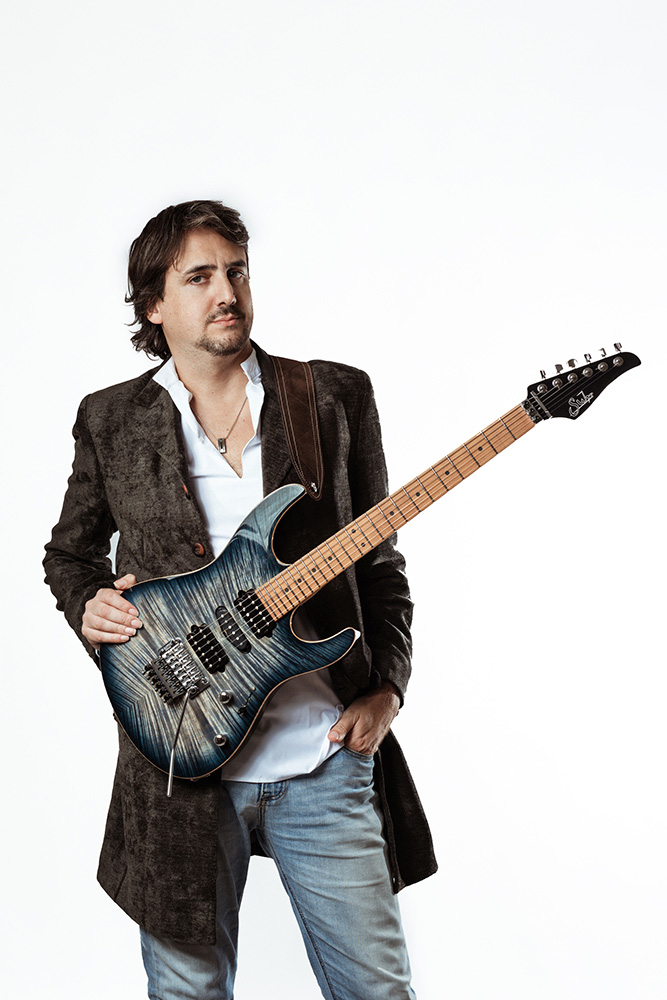 Since January 2006 he has held master classes and seminars in the most prestigious academies and universities in the world: the GIT (division of the Musicians Institute of Hollywood), the USC (University of Southern California), both in Los Angeles (USA), Washington University of St. Louis (Missouri – USA) the LAMA (Los Angeles Music Academy) in Los Angeles (USA) and in July 2009 by New York University (New York – USA) on the occasion of the NY Summer Guitar Intensive Clinic, alongside names such as: Mark Whitfield, Muriel Anderson, Peter Leitch, Kenny Wessel, Jerome Harris, Peter Bernstein and Dave Scott. In the same year he records the album “Heard Instinct” (2009), contemporary Jazz CD in duo with Bruce Arnold, made in New York and produced by Museek Records.
In 2008 the album “ELEKTRIO” (XtraMuse Records) was released, considered one of the most interesting instrumental fusion albums of the latest line-up.
He demonstrated for the WASHBURN guitars and RANDALL amplifiers at the NAMM SHOW 2009 (Los Angeles, USA) and at the MUSIK MESSE in Frankfurt (Germany) in April 2009, being among other things the only Italian artist invited to play at the Agora Stage, where guests included Steve Lukather, Will Calhoun, Paul Gilbert, Simon Phillips, the Rage and Michael Batio.
In June 2010 he is in Asia for a mini tour presenting his music and for some showcases, including: Clinic of Modern Guitar and Showcase at the Music School and participation in the Itaewon International Festival, both in Seoul (South Korea) and Clinic in Tokyo (Japan) at the Tokyo Guitar Center.
In 2011 it is the turn of “Guitar Academy 2011”, which comes out in conjunction with the celebration for the 15 years of the Guitar Academy, as well as the publication of a DVD on the history of his Academy.
In 2012 Andrea released 2 new acoustic CDs in duo with Carlo Fimiani and Chester Harlan, respectively “Acoustic Portraits” and “Life Portraits” (both for XtraMuse Records).
Andrea is the General Director of the Guitar Academy (Academy of Modern Guitar) with offices in Sicily in Catania and Syracuse and is the President of the ESC (European Summer Campus).
He carries out his teaching activity in the Catania office and teaches at the Liceo Musicale “A. Musco ”, also in Catania.
In January 2018 “Anthology 1997-2017” was released which represents a collection of songs extracted from previous albums.
In December 2019 his first video course “Melodic Chordal Shapes Guidebook” was released for the well-known American educational platform TrueFire and he is the third Italian artist to have been invited. For the same company he participates in the Fireside Festival, a totally online guitar festival, during the national lockdown, with other artists of the caliber of Rusty Cooley, Doug Munro, David Becker and Andy Aledort.
In January 2020 he was invited by the Musicians Institute of Los Angeles (USA), for the second time, to hold an open counseling and by the USC (University of Southern California) for a masterclass. During the same period in Los Angeles (USA) he held showcases for Hughes & Kettner and for MOOER on the occasion of NAMM 2020.
The February 2020 issue of the guitar magazine AXE MAGAZINE dedicates the cover and a special to Andrea for his artistic activity and the latest album “Next Nexus”, made between Italy and Los Angeles (USA) with guests Ric Fierabracci, Stuart Hamm, Thomas Lang, Atma Anur, Greg Howe, Martin Miller and Andre Nieri.