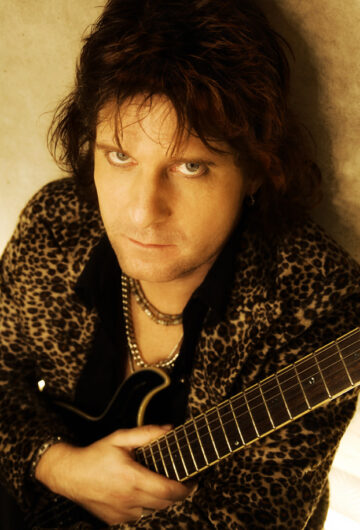 Kee Marcello (born Kjell Hilding Lövbom on 20 February 1960 in Ludvika, Sweden) is a Swedish musician, best known as the former guitarist in the hard rock band Europe. He is currently a member of the glam metal band Easy Action. Concurrent to his role with Easy Action, he also maintains a side solo project. Throughout the years, Marcello played in various bands such as Stetson Cody Group, Norbom Hilke and Noice, before he formed Easy Action in 1983. They released two albums, Easy Action and That Makes One, before Marcello left the band in November 1986 to join Europe, replacing their original guitarist John Norum. Marcello had previously collaborated with Europe vocalist Joey Tempest on the single "Give A Helpin' Hand" for the charity project Swedish Metal Aid.

Marcello recorded two albums with Europe, Out of This World and Prisoners in Paradise, before the band decided to go on hiatus in 1992.
In 1988, Marcello recorded his first studio album with Europe, Out of This World, at Olympic Studios in London. Later that same year they embarked on the “Out of This World Tour”, which started off with a US leg together with Def Leppard. Ex-Thin Lizzy keyboardist Darren Wharton’s group Dare supported the band on the European leg of the tour. Marcello, who in 1987 emigrated with the rest of the band to the Caribbean in an attempt to escape the then ferocious Swedish margin tax, was spending most of his time in Los Angeles when not in Providenciales on Turks and Caicos Islands. The writing and pre-production of the next album took place in LA and San Francisco. It was recorded in 1990-1991 at Enterprise Studios in Burbank, California. Prisoners in Paradise was released in 1991 and shortly after they embarked on the “Prisoners in Paradise World Tour”. After the tour the band decided to go on hiatus in 1992.
In 1993 Marcello and former Easy Action drummer Freddie Von Gerber collaborated in the band Red Fun, and released a self-titled album that featured a melodic metal sound with heavy blues influences. In 1995 Marcello released his first solo album Shine On, which had a west coast influenced sound, similar to The Eagles. In 1999, he made a guest appearance on the In Flames album Colony, contributing the second guitar solo on the song “Coerced Coexistence”.
In 2003 he formed the band Kee Marcello’s K2 and released the album Melon Demon Divine. When Europe reunited with John Norum later that year, Marcello decided not to be part of the reunion. “I told them I didn’t want to participate in a [new] studio album because musically, I want to go in a different kind of direction than the music Europe stands for,” he said in an interview, “Then we talked for a while about doing a six-piece tour – it didn’t turn out that way because of different reasons.”
In 2005 K2 joined forces with Canadian singer Alannah Myles at the Swedish final of the Eurovision Song Contest, performing the song “We Got It All”. The song scored few points in the vote and didn’t make it to the international final.
Easy Action reunited for a gig at the Sweden Rock Festival in 2006, while was working on a new studio album.
Marcello also worked on his solo carreer releasing “Redux: Europe” in 2011, “Judas Kiss” in 2013 and “Scaling Up in 2016”.