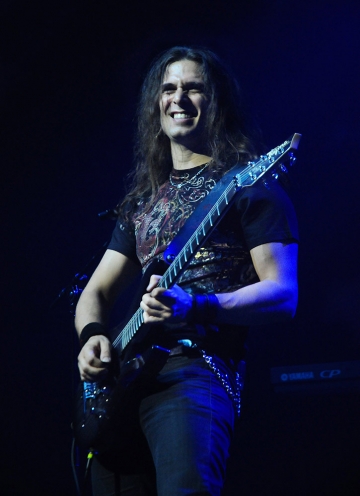 In March 2007 Kiko Loureiro was voted “Best Guitarist” by respected Japanese music publication BURRN. Quite an achievement for a guitarist from Brasil whose meteoric career has spawned numerous studio and live albums with ANGRA, as well as solo albums “No Gravity” and “Universo Inverso”. Beginning his musical studies at age eleven, Kiko has never stopped evolving both as a musician and as a composer. Today, at age 34, he is in the enviable position of being respected, well-known and influential worldwide.

Kiko was just 19 years old when he was invited to join the newly-formed ANGRA. Before then he studied with Mozart Mello and played with various local groups in his hometown of Sao Paulo, Brazil. Kiko’s solo career has developped parallel to that of ANGRA.
In March 1993 Kiko filmed his first instructional video. Shortly thereafter he travelled to Germany to record ANGRA’s debut album “Angels Cry”. The album’s overwhelming success opened many new markets to the band, such as Europe and Japan.
Two years later the band recorded “Holy Land”, again in Germany, with production handled by Charlie Bauerfeind and Sascha Paeth. This record strenghthened the band’s position as a leading melodic heavy metal act on the world music scene.
Prior to the 1998 release of ANGRA’s third studio opus “Fireworks”, they issued two Eps “Freedom Call” and “Holy Live” the latter recorded in Paris, France. “Fireworks” was recorded at major UK studios Abbey Road and Power House, and produced by Chris Tsangarides. Its concept was different from their previous work, it was more focused on their heavy metal roots.
In October 2001 ANGRA presented their new line-up and new album “Rebirth” to the world. Again recorded in Germany, but this time produced by Dennis Ward, the album’s title was self-explanatory! Both the record and the new line-up’s live work received unanimous worldwide acclaim. Following the success of “Rebirth” both ANGRA, the band, and Kiko, the guitarist, garnered many rewards from numerous Brazilian and Japanese publications. In the same year Kiko released another instructional video, this one his first of many on DVD for Japanese publication Young Guitar.
In May 2002 a “Rebirth” songbook was published, the first hard rock publication of its genre in Brasil! It has since been distributed around the world.
The mini-album “Hunters and Prey”, once again produced by Dennis Ward, was issued around the same time. It included eight songs and a multimedia track. During the supporting tour ANGRA performed a major tour in Asia.
2003 saw the worldwide release of “Rebirth World Tour – Live in Sao Paulo” DVD and double CD.
At the same time Kiko released two more instructional DVDs “Técnica e Versatilidade” and “Os Melhores Riffs e Solos do ANGRA”. Both videos show the guitarist at his best, in a clear and easy-to-learn way, with many tips and advice to enrich the musical repertoire of any guitarist.
September 2004 saw the release of ANGRA’s highly-anticipated concept work “Temple of Shadows”. The musicians are at their technical and creative best. Once again produced by Dennis Ward, the album features Brazilian musician/composer Milton Nascimento on the track “Late Redemption”.
During his live work with ANGRA Kiko always found time to highlight his musicianship by giving guitar clinics or workshops around the world. His debut solo album “No Gravity” was recorded in Germany, once again produced by Dennis Ward. Kiko plays all instruments on the thirteen instrumental tracks except drums, handled by Mike Terrana. “No Gravity” had a worldwide release in 2005. Both a “No Gravity” songbook and a playback CD were also issued and are highly sought-after by musicians and fans alike.
Kiko’s talent is increasingly recognized around the world and companies such as Tagima guitars, ESP guitars, Laney amps, Sparflex cables, D’Addario strings, Zoom effects, Morley wah and Seymour Duncan pickups have associated their name to his and also released signature models under Kiko’s specifications.
Kiko has also featured on the cover of music publications from South America to Japan to Europe, too numerous to mention!
2006 saw the almost simultaneous release of ANGRA’s latest opus “Aurora Consurgens”, yet another concept album, and Kiko’s solo work “Universo Inverso”. This second solo album took an entirely different direction from the first one. Kiko is joined by three respected Brasilian and Cuban musicians for an innovative ten tracks of Latin Jazz instrumental music. Whereas this new direction may have surprised some of ANGRA’s and Kiko’s diehard metal fans, it has received positive critical acclaim worldwide and only serves to consolidate his musical ability and creative versatility!
In 2009 Kiko released his acclaimed third solo album. Released all around the world, “Fullblast” features Mike Terrana on drums and Felipe Andreoli on bass. At the same period Angra and Sepultura did a Brazilian Metal celebration tour in many different Brazilian Cities.
In 2010 Rock House, the leader in music instruction, announced the release of a new 2-set instructional DVD Creative Fusion, Beyond Pentatonics & Power Chord featuring Brazilian guitar virtuoso.
In addition to his rock/metal achievements, Loureiro has also played guitars on several eurobeat songs in collaboration with Dave Rodgers, including “Fevernova”, “Ring of Fire” and “The Road is on Fire”.
On 2 April 2015, it was announced that Loureiro had joined the American thrash metal band Megadeth, replacing Chris Broderick.
On 12 February 2017, Loureiro, along with Dave Mustaine, David Ellefson and Chris Adler, won the “Best Metal Performance” Grammy Award for the Megadeth song “Dystopia” at the 59th Grammy Awards.