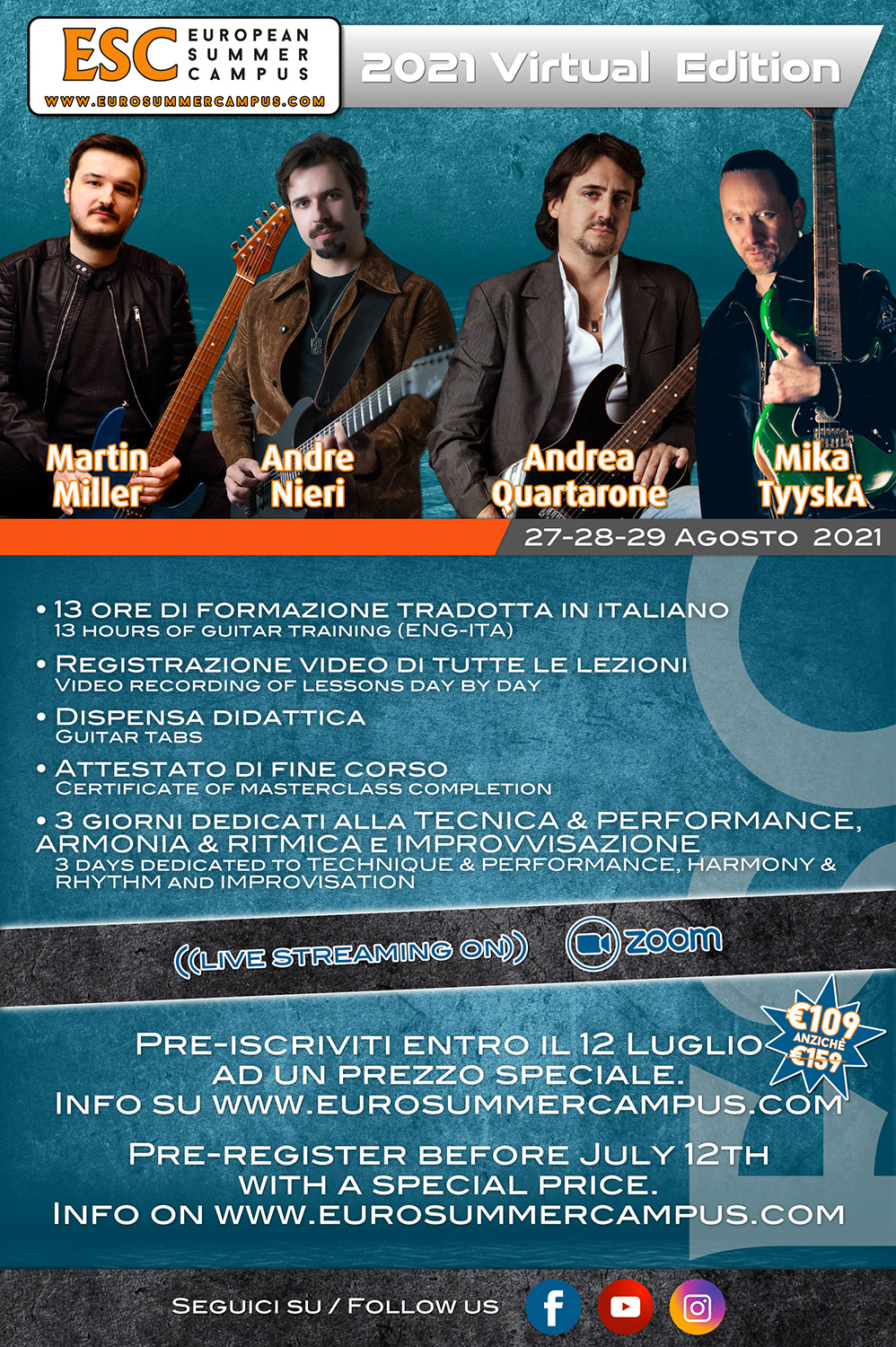 Martin Miller is a professional guitar player from Germany. He has been surrounded with music and decided to pick up the guitar sometime during elementary school. During his late teens he decided to get serious about the whole guitar world, and went to conservatory for several years and later attended the renowned Carl-Maria-von-Weber college of music in Dresden. Then he played a lot of bands with a lot of different musicians, an invaluable learning experience. After 5 years of academic studies, he got a diploma in guitar and music pedagogy in 2010. Now he does clinics and gear demonstrations all over the world, guitar and mixing sessions and is a regular contributor at Jamtrackcentral.com. His first solo album was released via JTC Records in 2013 and features a lot of very cool players (Federico Malaman, Ricky Quagliato, etc.). He is also a member of the Tom Goetze Band, which they released a great live-in-the-studio album with named "Bass Shuttle". Starting from 2012 he did his first international tours featuring original music exclusively, which also led him to countries outside of Europe such as the USA, Thailand and Russia. He started a new band project that is going to feature Sebastian Lanser (Drums, Panzerballett) and Anton Davidyants (Bass, Impact Fuze). His works includes also an album with Tom Quayle released in 2015. On top of this, Tom Quayle and Martin did a duo tour in 2014, doing concerts and clinics all over Europe and Japan.

Andre is an electric/classical guitar player, composer and instructor originally from Brazil, where he graduated from Carlos de Campos Conservatory in Sao Paulo, Brazil with a degree in Jazz and Brazilian Music. He works with a wide variety of musical style such as Rock, Fusion, Jazz, Brazilian Music, Latin, Pop and Classical (Guitar). Andre has been a private guitar instructor for 15+ years, has taught hundreds of guitar players as an instructor at Musicians Institute in Hollywood and has done many guitar clinics around the world (Spain, South Korea, Greece, Russia, USA, Italy, Brazil, Finland). In 2014 he was the winner of the most respected guitar competition in the world, called 'Guitar Idol' in London, UK. One year later he had an instructional material released through Jam Track Central. His first solo EP entitled 'Two Tone Live Sessions' was recorded in 2016 and features Bruno Valverde (Angra, Kiko Loureiro) on drums and Junior Braguinha (Virgil Donati) on bass. Andre has been featured on many guitar magazines such as Total Guitar (UK), Fusion Guitar Book (Japan), Guitar Interactive (UK), Guitar Load (Brazil), AXE MAGAZINE (Italy). Andre currently holds the guitar chair in the band of legendary drum virtuoso Virgil Donati (Planet X, Steve Vai), and is endorsed by Suhr Guitars and Bogner Amps. “Andre's playing is beautiful and shows and incredible control of technique, time, rhythm, phrasing and soul. His playing approach is unexpected, unpredictable and never cliche or contrived…” ~Reinhold Bogner, CEO Bogner Amplification.

He has 11 solo CDs to his credit which have received various reviews and favourable reviews from the national and international specialized press. In March 1995 he plays at the Teatro Smeraldo in Milan with the orchestra of the American minimalist composer Rhys Chatam, with the recording of a CD of world distribution; in the same year he was awarded in Switzerland as the best young European talent. He participated in the international convention of the A.D.G.P.A., Held in Soave (VR) in 1998 and 1999, alongside names of the caliber of John Stowell, Albert Lee, Mick Abrahms (Jethro Tull), Tommy Emmanuel, James Burton and Jerry Donahue. From 2001 to 2013 collaboration with AXE MAGAZINE, one of the most important magazine in Italy in the electric guitar sector, curating a monthly column on performance. For the past 20 years he has collaborated with GUITAR CLUB and CHITARRE, always as a columnist. Since January 2006 he has held master classes and seminars in the most prestigious academies and universities in the world: the GIT (division of the Musicians Institute of Hollywood), the USC (University of Southern California), both in Los Angeles (USA), Washington University of St. Louis (Missouri - USA) the LAMA (Los Angeles Music Academy) in Los Angeles (USA) and in July 2009 by New York University (New York - USA) on the occasion of the NY Summer Guitar Intensive Clinic, alongside names such as: Mark Whitfield, Muriel Anderson, Peter Leitch, Kenny Wessel, Jerome Harris, Peter Bernstein and Dave Scott. In 2008 the album "ELEKTRIO" (XtraMuse Records) was released, considered one of the most interesting instrumental fusion albums of the latest line-up from the most important international guitar magazines. He demonstrated for the WASHBURN guitars and RANDALL amplifiers at the NAMM SHOW 2009 (Los Angeles, USA) and at the MUSIK MESSE in Frankfurt (Germany) in April 2009, being among other things the only Italian artist invited to play at the Agora Stage, where guests included Steve Lukather, Will Calhoun, Paul Gilbert, Simon Phillips, the Rage and Michael Batio. In June 2010 he is in Asia for a mini tour presenting his music and for some showcases, including: Clinic of Modern Guitar and Showcase at the Music School and participation in the Itaewon International Festival, both in Seoul (South Korea) and Clinic in Tokyo (Japan) at the Tokyo Guitar Center. Andrea is the General Director of the Guitar Academy (Academy of Modern Guitar) and the President of the ESC (European Summer Campus). In December 2019 his first video course "Melodic Chordal Shapes Guidebook" was released for the well-known American educational platform TrueFire and he is the third Italian artist to have been invited. For the same company he participates in the Fireside Festival, a totally online guitar festival, during the national lockdown, with other artists of the caliber of Rusty Cooley, Doug Munro, David Becker and Andy Aledort. In January 2020 he was invited by the Musicians Institute of Los Angeles (USA), for the second time, to hold an open counseling and by the USC (University of Southern California) for a masterclass. During the same period in Los Angeles (USA) he held showcases for Hughes & Kettner and for MOOER on the occasion of NAMM 2020. The February 2020 issue of the guitar magazine AXE MAGAZINE dedicates the cover and a special to Andrea for his artistic activity and the latest album "Next Nexus", made between Italy and Los Angeles (USA) with guests Ric Fierabracci, Stuart Hamm, Thomas Lang, Atma Anur, Greg Howe, Martin Miller and Andre Nieri.

Mika is a composer, musician, guitarist and an animator. Many people know him for his work with cartoon animated guitarist Mr. Fastfinger. He has released 5 instrumental albums so far and bunch of other releases. His peculiarity is to create worlds with sounds and push the boundaries. His approach on guitar playing resembles the way of an animator. The notes only become music when you make them breath. In his book drama, atmosphere, feeling and storytelling are the most important aspects in music. In addition to making music, his human aspect is seen in sharing and teaching what he learns along the way. Mr. Fastfinger, animated guitarist was originally created for the incredibly successful, now legendary website Guitar Shred Show in 2005. Soon the character started to live its own life outside the website. Live performances followed the success. Debut album was released in 2009.

Fill in the following form with your personal details and additional information, necessary for registration.
This information will have no effect if payment is not made!